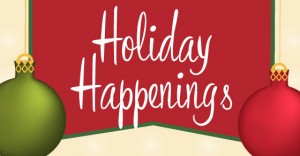 1. Grand Ledge Holiday Traditions (December 5 & 6) Travel to holidays past as you visit historic Victorian homes and the museum. Also stop by a few more events in mid-Michigan to see the 1928 Barton Theater organ, the Holiday Market, festive tables, and decorated trees all at the Opera House.

2. Grand Ledge Christmas Parade (December 4) at 7 p.m. Boundless family entertainment to kick off the holiday season with a Lighted Float Parade starting at the fire barn, going across the bridge, and ending with Santa at the Sun Theater.

There are more holiday events in Mid-Michigan this weekend, such as:

MSU Holiday Arts & Crafts Show. (December 5-6) I try and make it to this show every year. Four floors of the MSU Student Union packed with arts and crafts vendor booths. Awesome. Easy to score some handcrafted Spartan items.

Williamstons Annual Light Parade. (December 5) The parade steps off at 6 pm, with illuminated floats and vehicles, marching band, animals, and more! After the parade, Santa and Mrs. Claus will help with the lighting of the tree in front of City Hall.

And then theres Christmas-themed theatre!

Handels Messiah at Wharton Center for Performing Arts. (December 6) Composed 274 years ago, Messiah, which includes the famous Hallelujah Chorus, continues to be one of the worlds most popular works. Choral Union, University Chorale, and State Singers share the stage with the MSU Symphony Orchestra to continue this powerful holiday tradition.

Here are even more Holiday events and happenings going on in Greater Lansing.

Did you know that Greater Lansing offers over 150 things to do? With only 48 hours in a weekend, the clock is ticking. Download the LAN150 Bucket List to get started.