In case you didn't know this tidbit about me, I love chocolate. It delights me. It fills me with a warm fuzzy feeling mixed with comforting thoughts and fond memories. It makes me feel good. Every bite is savored and every crumb is consumed. So it is with great anticipation each year that I look forward to the MSU Museum Chocolate Party at the Kellogg Hotel and Conference Center. It is one of the few professional culinary events thats open to the public where local chefs create masterpieces out ofyes, indeed, chocolate.

This years theme is 3-D so it will be interesting to see what these culinary artists come up with. Two dimensional chocolate is just so flat, right? And this is a fundraiserbenefitingthe MSU Museum, one of my favorite places on campus, so its a win-win. Seriously, how can you not win when it's all about chocolate.

Bring on the dark, the light, the milk chocolate and everything that goes with it. Its time.

Tickets are $30 for the general public and $25 for MSU Museum members in advance, and $35 at the door. A special "Premier Chocolatier" ticket for $75 offers an advance preview of Chocolate Party creations and a year-long MSU Museum membership. 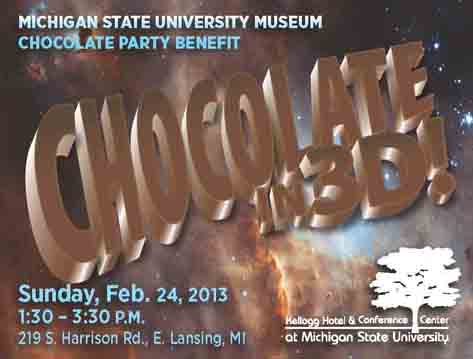