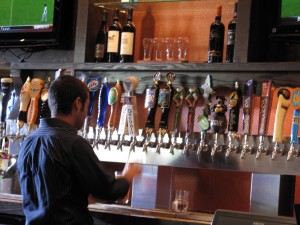 Pizza House at the Hannah Plaza in East Lansing

Beer, once thought to be the traditional drink of the working class, has morphed into something new, bold and wonderful. While I happen to think that there is a time and place for the Budweisers and the Michelob Ultras, it appears that the smaller breweries have come crashing into the mainstream without taking hostages. We are fortunate that Greater Lansing is home to numerous places where discerning beer drinkers can find both craft beer and micro-brews. Phrases like tapping firkins and filling growlers, seasonal flavors and IPAs are bounced around casually. The nomenclature is new and never-ending and this town appears to full of people who love their specialty beer. So whether you like your beer dark, bitter, malty or with a mild citrus or grapefruit-y taste, you can find it right here in Greater Lansing. Most bars that serve it are locally owned and operated. Some brew right on the premises. Some have mugs you keep on the shelf or wall, like a beer club. But at every one of these places, you can find a beer to your taste.

Heres the short list to find some great beer in Greater Lansing:

So popular is beer, the world's best-selling alcoholic drink, that it is often taken for granted. Yet scientific analysis shows that a glass of beer has within it as many aromas and flavors as fine wine. Not everyone understands this, but an increasing number of people do. --Michael Jackson (no not THAT Michael Jackson)

Heres some interesting ideas from anarticle about the difference between and craft brewery and a micro-brewery:

A craft brewery brews no more than 2 million gallons of beer per year and is owned independently. Unlike a micro-brewery, a craft brewery has set limitations on the techniques of their beer production. A craft brewery's beer must contain at least 50 percent traditional malt, rather than adjuncts such as oats, barley and wheat and there lies one distinction. These ingredients add flavor to the beer. Most craft beers are of a European style like ales, stouts and porters. One of the most well known craft brewers is the maker of Samuel Adams; The Boston Brewing Company.