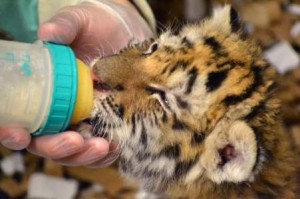 Three baby Amur tiger cubs were born nine weeks ago at Potter Park Zooand have been closely monitored by me along with thousands of other people who just cant get enough of their cuteness and antics via an ingenious cub-cam that monitors the nursery where theyre currently housed. Kira, Savelii, and Ameliya-all girls were born at Potter Park Zoo on September 13th and are being raised by hand after a little bout with pneumonia. Watching on the cub-cam has been a real treat and also a real time eraser, especially at feeding time. The three cubs are all girls, and have been named Savelii, Kira and Ameliya. The recent births bring Potter Park Zoos tiger population to five. Their mother, Nikka, arrived in Lansing in 2009 from Connecticuts Beardsley Zoo. Sivaki, their father, was born at Potter Park Zoo in 2005.

Its been around four weeks now since I first caught a glimpse of the babies. At that time, they were not too sure-footed and their feet slid around a lot underneath them. But now you can almost visualize them as adults as they vie for the prime top spot on the ramp. Take a peek now, because they will be graduating from the nursery to the feline/primate house. If you havent been to Potter Park Zoo, this building is a real treat. When the big cats are indoors, there is nothing but a plate of (hopefully) very sturdy glass between you and their awesomeness. They lounge and stare at you (or ignore) with that aloofness that only a cat can achieve. But its extremely up close and personal and pretty intimidating and impressive all at the same time.

So plan on a visit. The zoo is open year-round and its really cool during Wonderland of Lights when it transforms into a winter wonderland light display. And Ill give you fair warning. Once you catch a glimpse of those cubs, you just might lose some productive time